An unbelievable Christian Benteke last gasp volley stole all three points from Brighton, who utterly dominated the game, in their grudge-match clash on Monday night.

Joel Veltman’s first ever Brighton goal in the second half had cancelled out Jean-Philippe Mateta’s audacious pirouette effort, before the Belgian striker produced a moment of magic in the 95th minute.

The hosts had a firm grip on the game all night, but were made to pay for the two goal-scoring opportunities they conceded.

A sluggish start was highlighted only by a half-chance on 19 minutes. Brighton defender Veltman powered in a low cross just beyond the reach of Neal Maupay who instead of a producing a finish, performed an air-kick.

The Seagulls dominated possession early on but it was Palace who would strike first blood, very much against the run of play.

Wonderful work from Jordan Ayew saw him outpace two defenders on the wing before finding Mateta in the box who swivelled his body to back-swipe the ball past Robert Sanchez on 28 minutes. That was the 23-year-old’s first goal in English football.

That was also the first goal Brighton conceded at home in the Premier League in 344 minutes, while it was the first time in two years that Palace had found the back of the net when Wilfred Zaha – who missed the game through injury – was not playing.

The goal prompted Palace to tighten up at the back with Brighton resuming their lion’s share of possession.

Veltman curled an effort just wide from 20 yards out on 39 minutes before Lewis Dunk powered a header goal-wards on the cusp of half time but Palace custodian Vicente Guita made sure his side did not concede in the first 45 minutes by clutching hold of the defender’s effort.

Danny Welbeck came on at half-time for Brighton and bursting out of the blocks.

Within seconds of the restart the former England international fired a shot just wide, sending a stark warning to his opponents.

The 30-year-old played a part in his side’s equaliser too. Pascal Gross’ long-range effort fell to the striker, forcing a defender to prod the ball from his grasp but straight to Veltman who made no mistake inside the area on 55 minutes.

Just past the hour mark, the Palace defence was at sixes and sevens again. Shots from Welbeck, Alexis Mac Allister and Leandro Trossard had to be consecutively stopped in a matter of seconds by the athletic Guita, who was kept on his toes for the rest of the game. 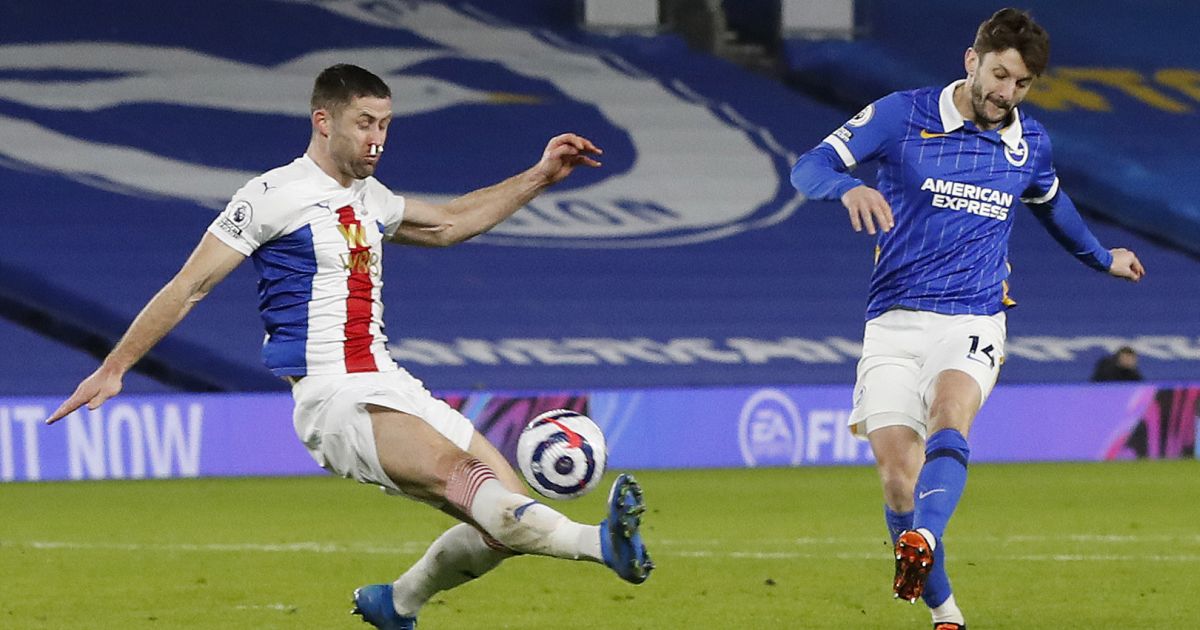 Welbeck was in the centre of the action yet again just moments later, Gary Cahill having throw his body in the line of his powerful strike this time.

The former Chelsea player would prove be crucial in Palace getting the win. Palace were being pinned back in their own half, being unable to find an outlet at any point during the second period.

Adam Lallana should have made them pay but missed a glorious chance to put his side ahead on 75 minutes when he scuffed an excellent opportunity over the bar from 14 yards out.

Cahill made what was to be a match-winning block in the dying embers when he flung himself in front of substitute Alireza Jahanbakhsh’s net-bound effort.

The moment of the game, and possibly of Palace’s 2021 so far, came deep into stoppage. Ayew produced some twinkle-toes on the flank once again before crossing into the box.

It was not dealt with properly and fell to Benteke who slammed the ball home into the back of the net to sink Brighton hearts and send the Palace bench barmy.

The visitors move up to 13th with the three points while Brighton stay 16th and just four points off the drop zone.