UPDATED: Richmond superstar Dustin Martin will remain in Queensland hospital with a kidney injury suffered in last night's win over Brisbane and will most likely miss his side's flight back to Victoria.

Martin was badly hurt and in serious pain after a collision with Mitch Robinson in the third term. The premiership star was examined in the rooms and sent to a local hospital for scans before the Tigers fly home to Victoria today, but remained in hospital this morning.

Martin is now in doubt for next week's Grand Final rematch against Geelong.

Following the win, Richmond coach Damien Hardwick revealed that Martin said that he would be fit to play next week but will lean on the medical advice the club receives.

"He got a kick into the stomach, we've sent him to the hospital for precautionary reasons," Hardwick said.

"Obviously we're flying home so we want to make sure he'd available to fly, it'd be a tough drive for Dusty otherwise. We'll see how we go.

"He feels sore, but straight away he said he'd be fine for next week, but we'll wait and see what the doctors say and what the scans show."

Already without a number of first-choice players, the Tigers will be sweating over the health of Martin, who was flattened by Mitch Robinson in a brutal contest.

The incident occurred at a centre bounce with just over four minutes left in the third quarter when Robinson charged off the wing to meet an on-rushing Martin head-on, leaving the Brownlow Medallist doubled down. 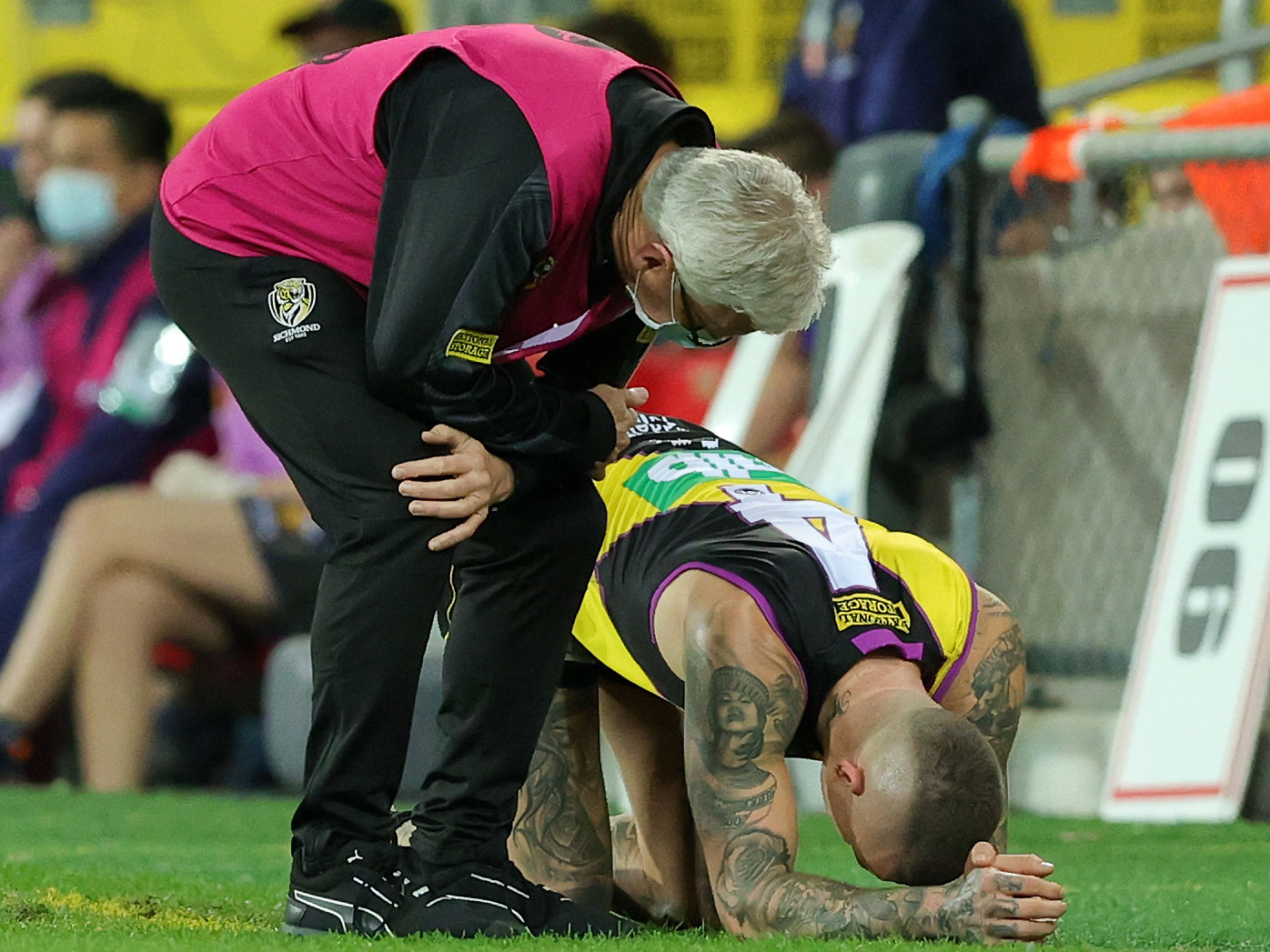 Martin was unable to get up onto his feet for several moments as he was attended to by Richmond's medical staff, before eventually gingerly walking off the ground.

After initially sitting on the bench, the 30-year-old went down into Richmond's rooms at three-quarter-time before being ruled out of the game with what the club originally called a rib injury.

With pivotal matches up against fellow finals contenders Geelong and Fremantle on the horizon in the next fortnight, Richmond can ill-afford to lose its best player for any prolonged stretch.

Martin's injury took some of the gloss off a welcome win for Damien Hardwick's side, who had lost four straight matches coming into tonight's clash. 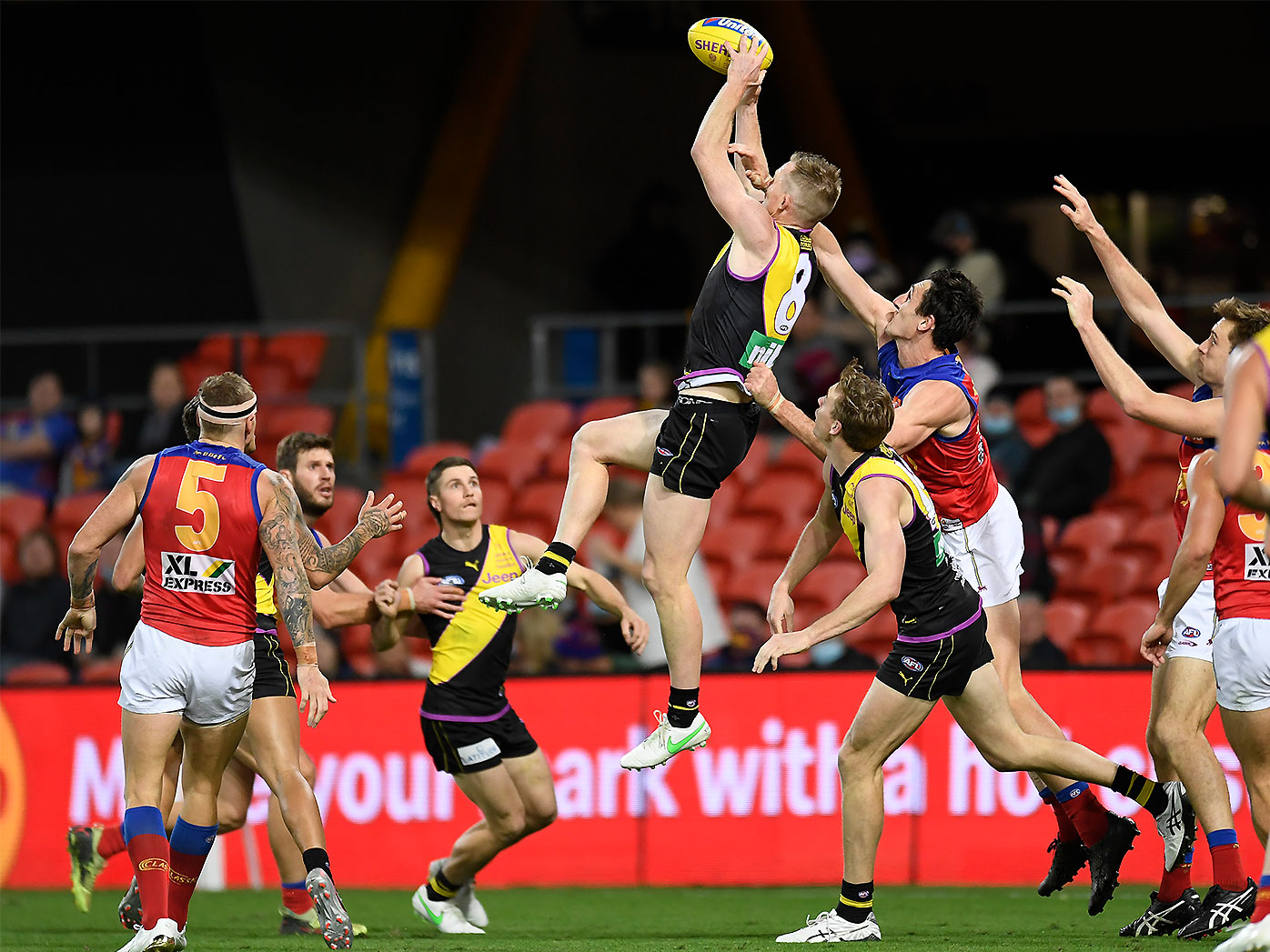 The three-time Norm Smith Medallist was one of two Tigers injured, with wingman Kamdyn McIntosh substituted off in the first half with a hamstring injury, with Jack Ross coming on as the medical sub.

Richmond was boosted by Jack Riewoldt who nailed a season-high six goals in his 300th match, while young ruck-forward Mabior Chol added another four majors.

Riewoldt, who recently signed a new deal with the club, started the proceedings early by taking a signature high mark and nailing a goal in the opening minutes.

Richmond incredibly climbed five spots on the ladder after the 20-point win, jumping to seventh on the ladder with a match against the ladder-leading Geelong on deck in Round 19.