Tottenham manager Jose Mourinho highlighted the “complete change of mentality and personality” of his players after admitting his squad were unhappy with their draw with Chelsea.

Spurs appeared content to settle for a point for large parts of their London derby with Chelsea.

The usually vibrant Harry Kane and Son Heung-min were largely kept quiet, but the club’s new-found defensive solidity was on show after earning a hard-fought clean sheet.

The result puts Tottenham back atop the Premier League table, and Mourinho insisted a draw at Stamford Bridge is never a bad result.

He told Sky Sports: “A draw at Stamford Bridge is usually a positive thing and staying top of the league is also a positive thing. But my dressing room isn’t happy with that and that is fantastic.

“It’s a complete change of mentality and personality.

“The game did not have many chances. It is a game where we both wanted to win. We respect each other. Nobody gambled. Nobody tried to change the direction of the game.

“Everybody was thinking ‘one mistake, we get punished’.

“They had one shot from distance, we had more in the first half than the second. I think a big game is difficult for both teams.”

Regarding the performance of debutant Joe Rodon, Mourinho said: “It is difficult but he showed personality. I will analyse the game step by step with him. But from my quick analysis I got two mistakes from him but after that he was solid and comfortable and that is important.

“You compare the two teams and centre-backs and Thiago Silva, coming from an amazing career, and Joe Rodon, coming from Swansea in the Championship. I have to be happy. He is an intelligent guy and wants to learn.”

When asked about the result returning Spurs to the top of the table, Mourinho said: “We stay top.

“I like the feeling and I think it is only for 2000 fans but the feeling of playing the first game with public and being top is a gift for the fans.

“Not just these 2000 but what they represent – the universe of Tottenham fans. We are happy. But I don’t change my mind.

“If we are a bit better we win today. It was there to win. To be top is just a nice thing. The next match we need to win.” 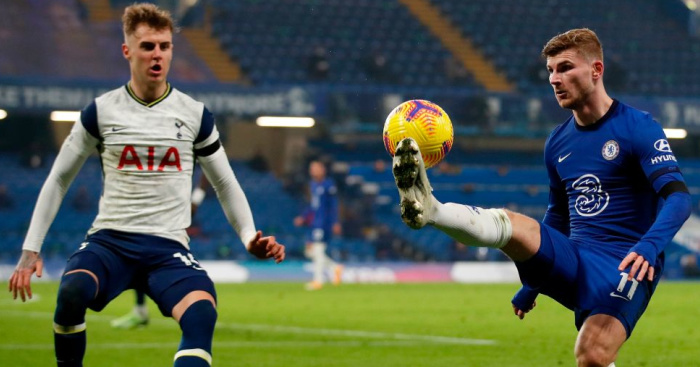 Centre-half Joe Rodon was awarded his first Premier League start in the absence of Toby Alderweireld.

The ex-Swansea defender put in a solid display, and echoed his manager’s sentiments when admitting: “sometimes you need to dig in and take a point.”

He told Sky Sports: “It is a tough place to come. To make my debut [first Premier League start] is a dream come true. Hopefully I can learn from this. They are a good opposition and I was in for a tough night.

“It is a massive game and you are playing against top players. Mistakes happen but I will learn from them.

“We always want to go into every game for three points. Sometimes you need to dig in and take a point.”

Aston Villa, Everton on alert as defender put up for sale for €10m