Oakland Athletics ace Chris Bassitt has a broken bone in his cheek that will need surgery to repair but he sustained no eye damage after being struck on the side of the head by a line drive.

Bassitt was taken to the hospital after getting hit by a ball from Brian Goodwin's bat in the second inning of a 9-0 loss to the Chicago White Sox on Tuesday night. The veteran right-hander has shown no signs of a concussion and a scan of his brain was normal, though Bassitt can't recall everything that happened during the ordeal.

Bassitt tweeted his appreciation for the support he has received.

"From the bottom of my heart, I'd like to thank the whitesox and Athletics staff, front offices, and owners. The support my family and I've received has been overwhelming. I'd also like to thank Rush University Medical Center and their staff. God is good. Can't wait to get back!" Bassitt wrote.

"We're all incredibly grateful that Chris is doing as well as he is today. It was an awful thing to have to watch," general manager David Forst said. "Also for our players and our staff to be there on the field as well."

"We're thinking about everything that the team went through last night. Chris had incredible care from the second Nick reached him on the mound to everybody at the stadium and ambulance and the hospital, we're very grateful for the care that he got.

"But also just very aware that Chris and everyone else has been through something pretty traumatic here."

Forst said it's too soon to guess whether Bassitt will pitch again this season or how long it could take him to recover. Six weeks is a typical healing time for such an injury, according to Paparesta.

Bassitt was released from Rush University Medical Center after receiving stitches for two cuts on his face and being diagnosed with a displaced tripod fracture — meaning three different bones — in his right cheek that will require surgery. With the bones out of place, they will have to be moved back into the right positions, Paparesta said.

Because Bassitt is still sore he hadn't yet resumed eating solid foods but was up and walking in his room, according to Paparesta.

If all goes well during a consultation Monday with plastic surgeon Dr. Peter Revenaugh, Bassitt's procedure could be done as early as Tuesday. It also hasn't been determined how long he might remain in Chicago immediately after surgery. 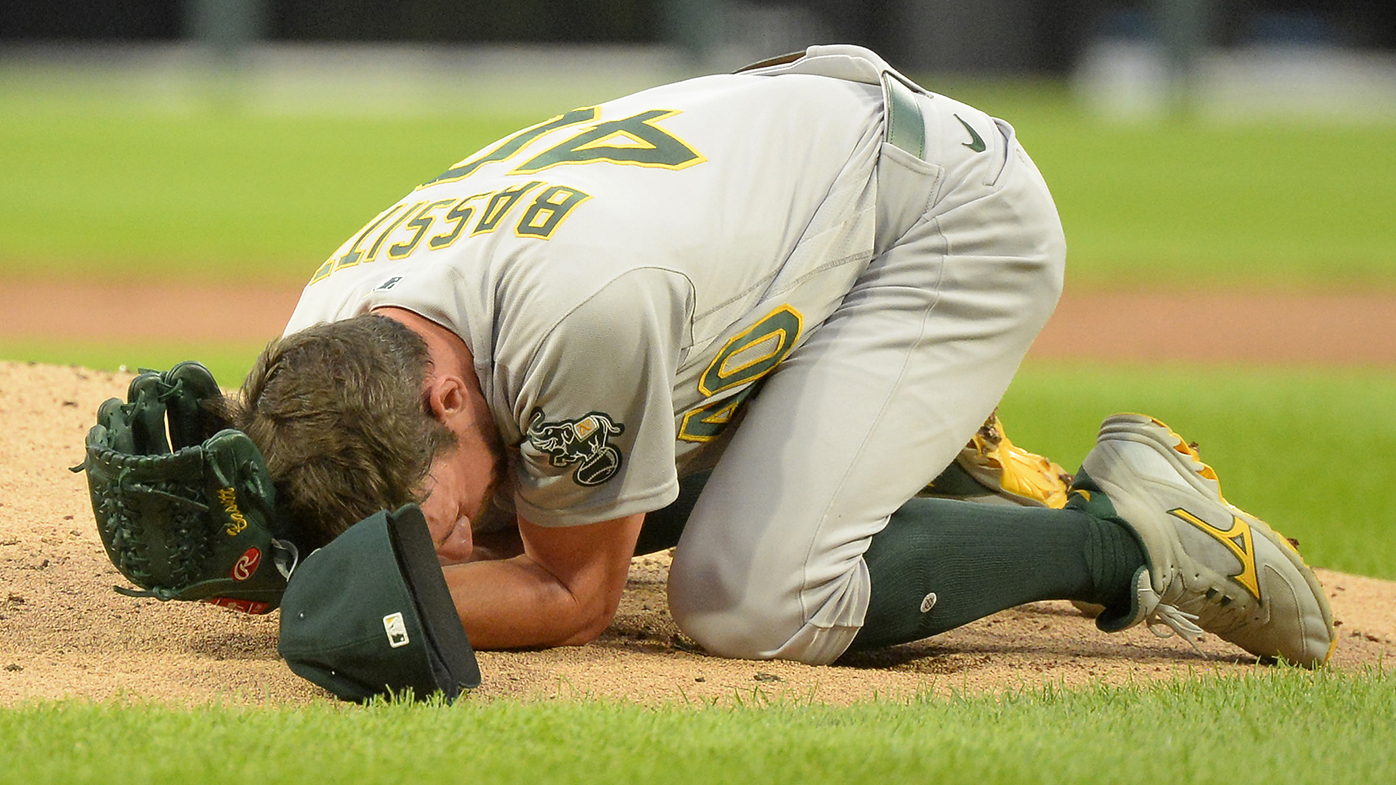 "The doc said that once he has the surgery done we'll kind of see how he's doing after about a week to 10 days and start getting him into some physical activity and kind of see how his body responds to that and how he's feeling," Paparesta said.

"We're looking kind of one week at a time at this point in time after the surgery's done. The other thing we need to be conscientious of is that the surgery goes as planned and it is the surgery that we anticipate. Once you get in there things could change."

Bassitt went down on the mound right after he was hit, holding his head, and his teammates quickly waved to the dugout for assistance. He never lost consciousness.

The A's said Wednesday that an exam of his right eye was normal for vision and no other damage was found in the eye or the orbital bone. The team also said a head CT scan revealed no further injury. 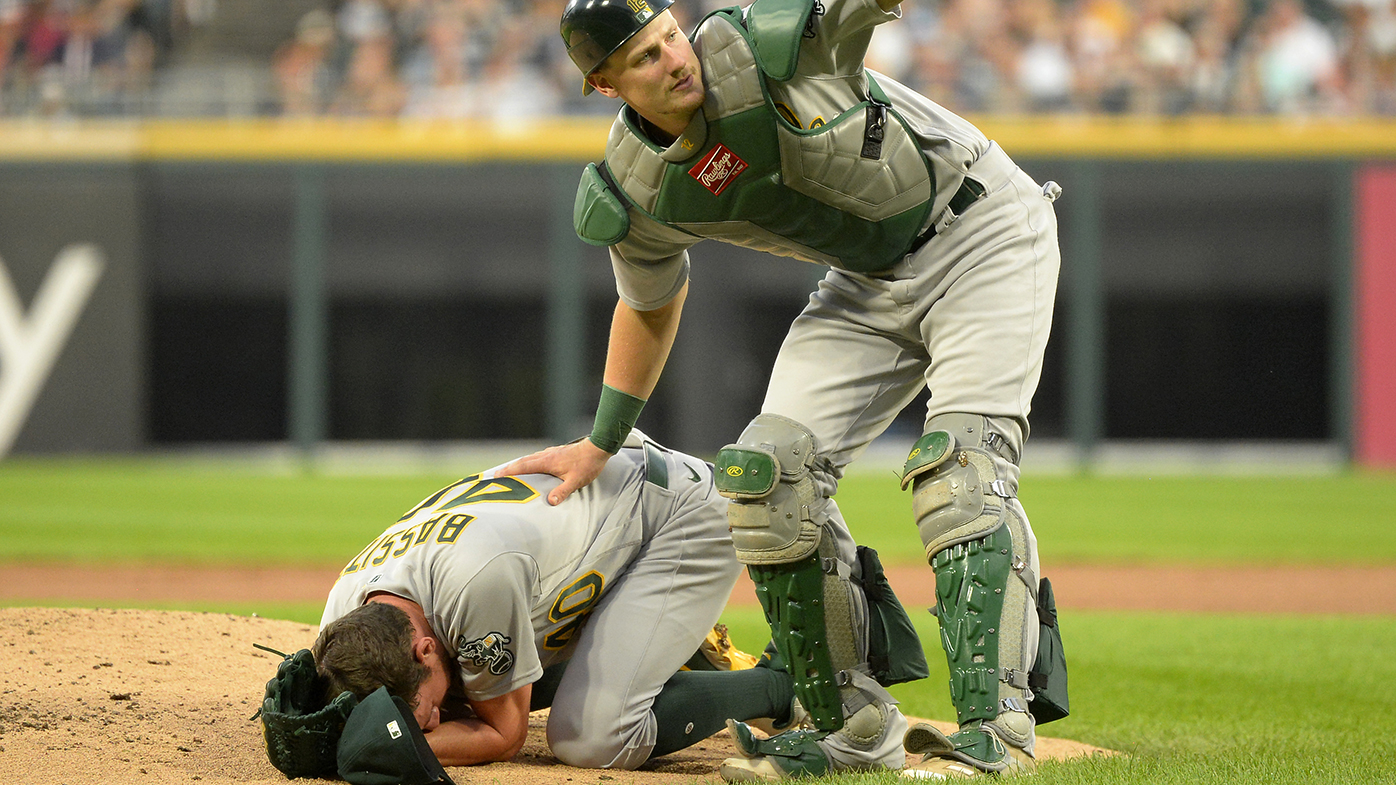 McCarthy took a line drive to the right side of his head off the bat of the Los Angeles Angels' Erick Aybar on September 5 that year. He sustained an epidural hemorrhage, brain contusion and skull fracture on the play, then underwent a two-hour emergency surgery at California Pacific Medical Center in San Francisco.

McCarthy reached out to the A's on Tuesday night in support after Bassitt's injury.

The 32-year-old Bassitt, who broke into the majors with the White Sox in 2014, is in the midst of another stellar season for Oakland. He was 12-3 with a 3.06 ERA in 24 starts heading into the game, leading the AL in victories.

"He is a tough, tough guy," manager Bob Melvin said. "If anybody is able to deal with this a little bit quicker or in a certain fashion it would be Chris."

The A's called up Paul Blackburn to take Bassitt's roster spot and the right-hander was set to start Wednesday with the other starters pushed back a day.

Melvin said everybody had to move forward after such a tough night.

"We got what we considered was good news today so everybody's in much better spirits in the clubhouse today," Melvin said. "You have to go through certain events in your career, this being on the extreme end but it's just going out there and trying to win today's game."