Gerson Rodrigues condemned the Republic of Ireland to an embarrassing 1-0 defeat in Dublin as Luxembourg won a World Cup qualifier for just the sixth time in their history.

The striker blasted home an 85th-minute winner at the Aviva Stadium to all but end Ireland’s hopes of making it out of Group A after just two games and pile the pressure on manager Stephen Kenny, who has won none of his first 10 matches at the helm.In truth, it was little more than the visitors deserved with Ireland keeper Gavin Bazunu, making his senior debut as a 19-year-old 25 years to the day since Shay Given did the same, having already made important saves from Rodrigues and Vincent Thill either side of the break.

"The gloom really does deepen for Ireland now…"

That, on a night when victory was the only option after Wednesday night’s opening 3-2 defeat in Serbia, was simply not good enough and leaves Kenny with serious questions to answer after a toothless display which will have simply added fuel to the fires of his critics.He handed a senior debut to Manchester City teenager Bazunu – currently playing his football on loan at League One Rochdale – as he, Jason Knight and James Collins replaced Mark Travers, Jayson Molumby and the injured Aaron Connolly.

In an untidy start by Ireland, Bazunu was called upon to make a regulation second-minute save from Vincent Thill after he had cut in from the right, but the home side eventually settled into the game and started the process of trying to break down the visitors.

They were denied the lead only by a point-blank save from Anthony Moris when, at the end of a move launched by Bazunu, Callum Robinson drove the ball across the six-yard box, where Collins slid in and seemed certain to score until the keeper made an instinctive 18th-minute block.

Kenny’s men were dominating possession, but playing largely in front of the visitors, who were getting plenty of men behind the ball in a largely successful effort to keep the hosts at bay.

The Republic stepped up a gear as the break approached to pin Luxembourg back deep into their own half, but were almost caught three minutes before half-time when Rodrigues attempted to catch Bazunu off his line, much as Aleksandar Mitrovic had done to Travers in midweek, but this time the keeper was equal to the task.

Robbie Brady replaced Matt Doherty, who had received treatment before the interval, as the second half got under way and his arrival gave his team fresh impetus from the off.

Olivier Thill curled a 49th-minute free-kick wide as he attempted to wrong-foot Bazunu, but the direction of travel was largely towards Moris’ goal. 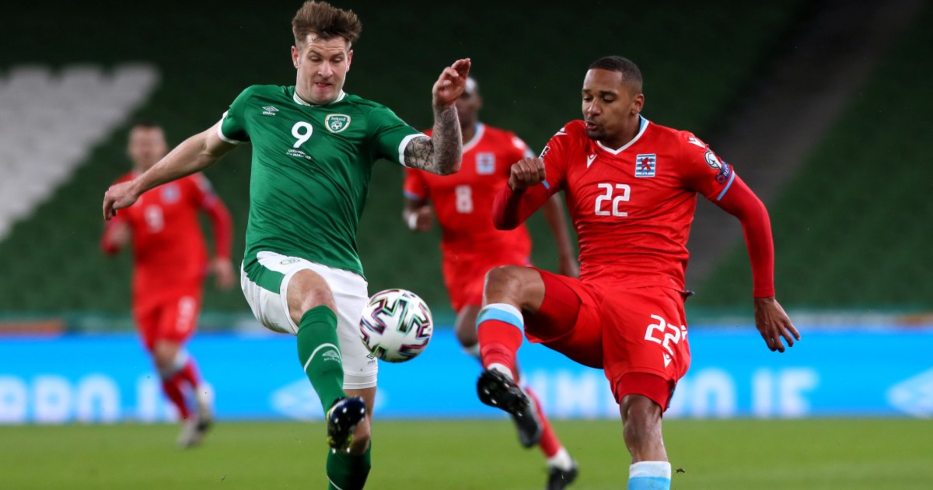 Alan Browne should really have added to the goal he scored in Belgrade when he met Brady’s 55th-minute free-kick unopposed, only to plant his header wide of the far post.

Kenny sent on midfielder James McClean for defender Clark in a search for inspiration, but Bazunu had to come to Ireland’s rescue once again within seconds after Vincent Thill had bundled his way towards goal with 62 minutes gone.

The home side were at least playing with greater urgency and Robinson skied a 67th-minute shot over after running on to a loose ball, but it was Collins who went close with an acrobatic effort from Brady’s 70th-minute cross.

But the night turned significantly darker for Ireland with five minutes remaining when they failed to deal with Moris’ clearance and Rodrigues took the opportunity to rifle a dipping shot past Bazunu from 25 yards and give his side an unlikely lead.

The Republic’s efforts to spare their blushes during the little time which remained amounted to nothing and the final whistle signalled a new low for Irish football.