Leicester boss Brendan Rodgers outlined what changed to produce a much-improved second half display, and insisted Foxes youngster Sidnei Tavares has a bright future ahead of him.

Leicester secured a vital three points after coming from behind to sink Brighton at the AMEX.

The Seagulls led for almost an hour before Kelechi Iheanacho and Youri Tielemans combined superbly to level the scores.

With the game seemingly destined for a draw, Daniel Amartey nodded the Foxes in front after an uncharacteristic error from Brighton goalkeeper Robert Sanchez.

Speaking to the BBC after the match, Rodgers said: “Brighton were better than us in the first half – we were too slow and not aggressive enough. They deservedly went in front.

“We had to look at things at half-time. We are much better than we showed in the first half. We were outstanding in the second half.

“They were excellent, they are a good side. You can see why they beat top teams.

Regarding the performance of youngster Tavares, Rodgers added: “We’re obviously thin on the ground with attacking players.

“Sidnei Tavares was excellent. Technically he’s very good. I felt we needed that player who can take the ball and pass it forward. It was a nice 70 minutes for him. He’s a talent.

"A super Sanchez save!"

“He needs to get more physical in the game. He loves the ball, that’s the type of player I like. He nearly scored a great goal. There’s a great opportunity here for him if he continues to work and keeps his head down and doesn’t get carried away.”

On their upcoming free midweek, Rodgers concluded: “I think it allows us to get onto the coaching field again.

“It’s the first free week I can remember in a long time. We can get some coaching into the players. The mentality has been incredible – to be up there challenging with 10 games to go.” 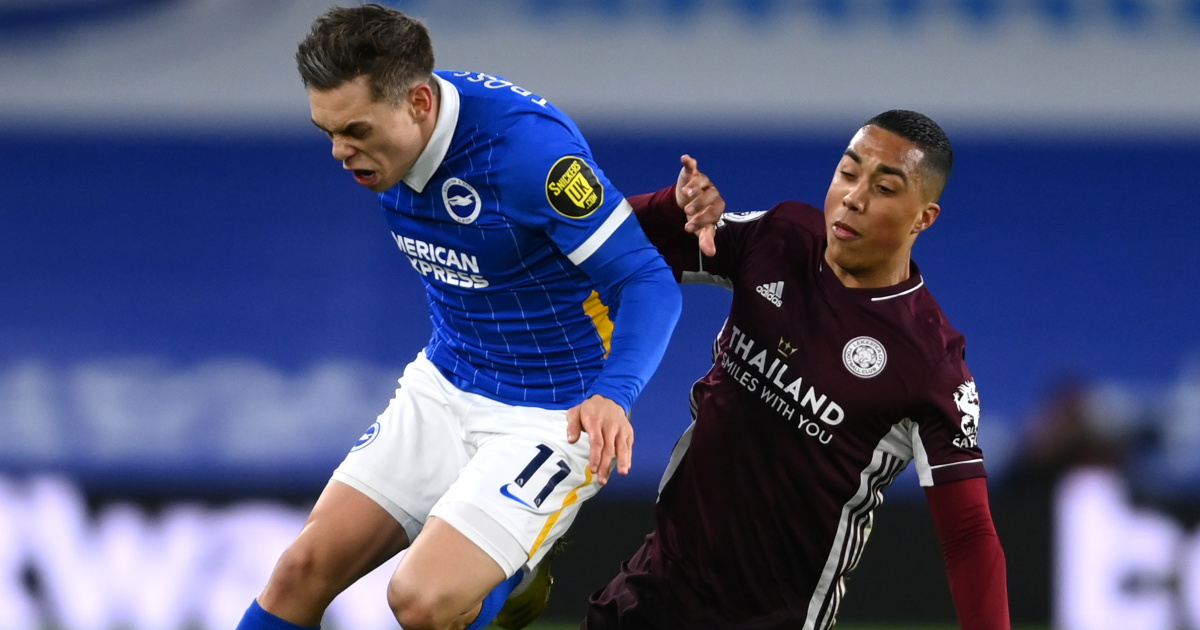 Leicester City midfielder Youri Tielemans also spoke to the press, telling Sky Sports: “The first half was not good enough at all. It was not difficult to do better in the second half. It wasn’t good.

“We had a good reaction and now we have to recover for next week and we have to start better.

“We were a bit loose out of possession and they got onto us very quickly. We didn’t react positively in duels and were not quick enough with the ball. It was a bit of everything.

“Credit to him [Kelechi Iheanacho] for the finish and we score in the end from a set-piece. We are very happy with a win. We need to try and make up for the guys who are not there and tonight we did it in the second half.

“It feels like a very big result. You could see they played good football, scored early in the game so it was up to us to react to that.”

Defences on top as Brighton and Everton play out lifeless draw