Thomas Tuchel continues to rattle through his Chelsea to-do list at breakneck speed. After the Blues’ best attacking performance of his reign so far, the new manager may well be thinking about checking off perhaps his most-pressing task.

Chelsea dismantled Crystal Palace with a devastating opening half-hour which had the Eagles fearing another home humiliation. Palace eventually avoided abject embarrassment in the scoreline but the gulf in class between these London rivals was all too stark.

Motivation was undoubtedly a factor. Palace are plodding into the summer, with half of their 14 participants today dawdling into free agency and the rest unsure whether it is worth impressing this manager as doubts swirl over his future.

In contrast, Chelsea’s players are fighting on three fronts and desperate to catch Tuchel’s eye. Which his attackers surely achieved at Selhurst Park.

Tuchel has spent much of his first two and a half months in west London harnessing individual talent, either reintegrating players who had fallen out of favour under the previous boss, or exploring how to utilise better the players whose underperformance led to a managerial change that few at Chelsea had the appetite for.

That focus on the individual has led to rapid improvement across Tuchel’s units. The German wasted no time in firming up his defence and tweaking his midfield to create better balance. Today was all about the refinement of his attack.

In Kai Havertz, Christian Pulisic and Mason Mount, Tuchel has probably found his best front three for the remainder of the season. With Havertz playing as a false nine, roaming between Pulisic on the left and Mount on the right, all three are starting in the roles most natural to them, allowing each to get into the positions to do maximum damage.

Mason Mount's game by numbers for Chelsea vs. Palace:

Which is what they inflicted upon Palace in the opening ten minutes. After toiling next to Timo Werner against Porto on Wednesday, Havertz offered a further tantalising glimpse of what might be to come with an opening goal which had ‘Tuchel’ stamped all over it.

It was Havertz who won the ball from Eberechi Eze in the Palace third before the 21-year-old made a beeline for the host’s goal. Receiving Callum Hudson-Odoi’s pass on the spin, the 21-year-old took three touches before using Gary Cahill as a screen for a cool finish into the far corner, highlighting the kind of composure which belies his Chelsea travails so far.

Pulisic has endured similar struggle of late, with his familiarity to Tuchel perhaps costing him game time in recent months. It was Tuchel who gave the USA star his debut at Borussia Dortmund and the manager already knew what the winger could offer. Whether he thought that was sufficient at Chelsea, it remained unclear. 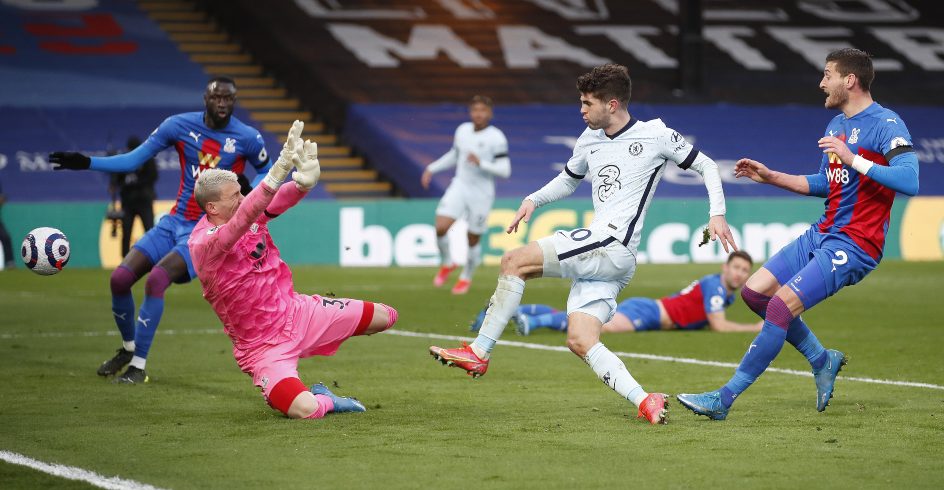 Perhaps until now. “I think the half positions in the front three could be a perfect fit for him,” Tuchel said about Pulisic this week and it was from those spaces that he penetrated Palace. His combination with Havertz for Chelsea’s second, and the emphatic finish, highlighted his confidence, while his second goal, to kill off whatever doubts Christian Benteke’s header might have prompted, highlighted his timing and desire to arrive in the box at the right time.

The pair, combining with the irrepressible Mount, cut through the home defence at will, offering Tuchel the closest thing to the ‘precision’ the manager craves. In the absence of deadly centre-forward, the trio appear to be Chelsea’s best form of attack for the remainder of what could be a hugely successful season after all.